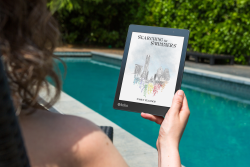 The building that housed CryoGenerous didn’t appear particularly special. In fact, it reminded Jason of his old office building. He wasn’t sure what he had expected, but for a business that housed the ability to create life, he expected something more. Maybe a little more glass and a little less brick. Maybe a little more of a modern design and a little less, well, lack of design altogether. He felt his heart rate accelerate as he approached the front door with his rolling suitcase. Today I’m finally going to get some answers, he assured himself.

He approached the receptionist’s desk and stood there until she finally looked up. “Oh, sorry, how may I help you, sir?”

“I need to locate my semen,” Jason said.

Reese looked at Jason’s bags and his disheveled state and contemplated calling security. “Well, sir, have you used our facility to make a deposit? Do you have an appointment?”

“Maybe we should begin with your name,” Reese suggested.

His name instantly registered in Reese’s mind and now she was the one who became nervous. Fortunately, she did not have a nameplate at her desk. The last thing she wanted was for Mr. Purdue to identify her as the voice on the phone. After all, she had broken her promise. This thought alone sent a tinge of guilt throughout her body. She brought up his file on the computer for show alone. “Ah, yes, Mr. Purdue, please wait here.”

Dr. Radkin stiffened his elbows and took a soft but firm grip on his putter. Moving his arms like a pendulum, he tapped the golf ball. “Shit.” The ball just missed the electronic hole. Reese walked in through his office door.

“Jason Purdue is in the waiting area.”

Dr. Radkin walked around to his desk and flipped through his calendar. “Hmm, does he have an appointment?”

“Well, I’m really busy, but I guess I can see him. Make sure he knows he needs to schedule an appointment next time.”

“Sir, I don’t think you understand. This is Jason Purdue.”

Dr. Radkin looked up sharply from his desk. “What in the hell is he doing here?”

“I suspect he’s looking for his sperm, sir.”

“No shit.” He began pacing behind his desk. “Okay, put him in the boardroom. I guess I’ll have to go talk to him.”

Jason had been sitting in the boardroom for nearly twenty minutes. He thought it an odd place to put a client. The room was cold and tiny, barely large enough to hold the small twelve-person board table. There were few decorations other than a potted plant in one corner and a medium-sized picture of a sailboat on the wall. Jason was beginning to get angry when Dr. Radkin walked in. He walked over to Jason and firmly shook his hand. “Good afternoon, Mr. Purdue.”

“Yes, of course. Well, I’m Dr. Radkin.” Jason wasn’t sure what to make of this doctor. He didn’t look much older than himself, and he didn’t care much for his extra firm handshake or the cocksure smile on his face.

“Well, you know my name and know my problem. So, have you located my missing sperm?”

A small bead of sweat trickled down Radkin’s forehead.

As soon as Reese saw Dr. Radkin enter the boardroom, she darted into his office. She started on his desk. She shuffled through the various scattered papers, but found nothing. She knew he had to have something. She’d overheard him talking on the telephone about an investigation. Next, she tried his computer. Since Radkin treated her less as a co-worker and more as slave labor, Reese knew his computer password. It wasn’t long before she found exactly what she was looking for. She grabbed a small notepad and pen from Radkin’s desk, and with pen poised to write, she paused for a split second. In that moment, the enormity of what she was about to do washed over her, but then her conscious snapped back, and she wrote the names and numbers onto the pad of paper. She ripped the page off of the pad and paused as she set the pen back onto Radkin’s desk. Then she put the pen in her pocket and slipped out of his office with a smile on her face.

Radkin took the seat closest to Jason. This was part of his plan. He must look confident and comforting to the client, but still professional. “I assure you, Mr. Purdue, everything is in hand and under control,” Radkin said as he patted Jason’s knee.

Jason scooted his chair so his knee was out of reach. “Clearly, that answer is not good enough. If it were, I’d still be in Denver. Look, I need to know if my sperm has impregnated a woman. Is that too much to ask?”

“Certainly not. Unfortunately, there are sensitive and confidential matters that prevent me from divulging that information to you at this time.”

“Okay, I get it. Tell you what; tap your fingers twice if I’ve inadvertently impregnated a woman. Tap them once if I haven’t, and you dumb fucks just lost my sample.”

Radkin’s hand remained tapless. “I understand you are upset, but as I said, I cannot divulge any information at this time. Please know that CryoGenerous has your best interests at hand, as it does for all of its clients. We will get this matter worked out and will notify you once it’s been resolved.”

“I see, more bullshit. I didn’t want to do this but maybe I should talk to my lawyer.”

Radkin’s hand gripped the table. “Please, Mr. Purdue, let’s be reasonable. We both know that once lawyers get involved, this matter will be out of both of our hands. You want answers. You will get answers as soon as they present themselves to our staff. As I said, we are working to resolve this in a peaceful and proper manner. Of course, for your inconvenience, your entire storage costs will be refunded.”

“I’m not leaving until I get answers.”

“Of course. You are a valued client and may stay here as long as you like. Reese will be happy to fetch you coffee, water, whatever you like. Please excuse me, I have work I must return to.”

Dr. Radkin left the boardroom. Jason was left staring at the wall.

Radkin returned to his office steamed. He picked up his phone.

“Calm down, Richie. Has he lawyered up?”

“No, but he mentioned it. I think I talked him out of it.”

“Are we any closer to finding it?”

“We’re getting there. We’re close to sounding the all clear but until then, and this is very important, you can’t tell Mr. Purdue anything. Got it?”

“I know. I know. You shouldn’t have to deal with this.”

“My golf game’s going to be all off today.”

“Calm down and reschedule your tee time for early tomorrow. Put it on the firm’s account.”

Jason stared at the sailboat picture on the wall. What am I going to do now? He thought about calling the police, but what would he tell them? They’ve abducted my sperm. Arrest them all! They’d probably arrest him. He thought about calling a lawyer, but he didn’t have a lawyer. Where would I get a lawyer? How much would it cost? Would it make a difference? Suddenly, Jason felt very absurd sitting alone in this lonely boardroom, a sad man looking for his spunk. He wasn’t sure what to do, but one thing he was sure of—he needed to get out of this room.

He walked back into the waiting room defeated, picked a chair, opened Stranger in a Strange Land and escaped.

Reese looked up from her computer. Jason had been sitting quietly in the waiting room for close to two hours. He looked sad, defeated. Reese felt bad for him. She felt bad for herself. He had refused her offers of a beverage. She had even tried to share her lunch with him, anything to make him, and her, feel better, but nothing worked. She fingered the piece of paper she had taken from Radkin’s office. She still hadn’t decided what to do with it. She tried concentrating on the work on her computer screen, but her eyes continuously drifted to Jason.

He knew he was going to have to leave soon. But where? Back to Denver? To a hotel? The receptionist kept looking over at him, and it made him feel uncomfortable. She was gone from her desk now, which made Jason feel a little bit better. Still, he needed a plan. He was getting some reading done but he found himself constantly rereading passages because his mind wandered. Jason wasn’t thinking about anything in particular. Instead, his thoughts hit that dead space, somewhere between dumb and nirvana.

“I know you said you didn’t want anything, but I brought you some coffee.”

Jason jumped out of his thoughts and looked up at Reese, dumbfounded.

“I wasn’t sure how you take it, so I also brought some sugar and cream.”

Jason wordlessly received the coffee, not quite sure how to react. She seemed different than Dr. Radkin. She was nice, thoughtful—compassionate. He didn’t like that his presence was more of burden on her and not on the slick Radkin. He was sheltered away in his office.

Jason finally found his voice. “Thanks.” He slid the pamphlet into the back pages of his book.