Earlier this week I started watching a movie on my computer but quickly decided that a Ridley Scott film is meant for the big screen, so I put up my 120 inch projector screen, sat back and enjoyed...well sort of. I paused the movie to answer a text message, and another text message, and another one. Then I had a craving for something sweet and since my cupboard was bare, decided to make oatmeal cookies. The gist -- I was up and down constantly. Afterwards, I thought to myself, now that is still a viable reason to go to a movie theater -- forced focus. Then I remembered this old post and thought I'd re-post it. An update:  matinee price for the theater I went to is now $8.50. Not sure about the popcorn and soda. 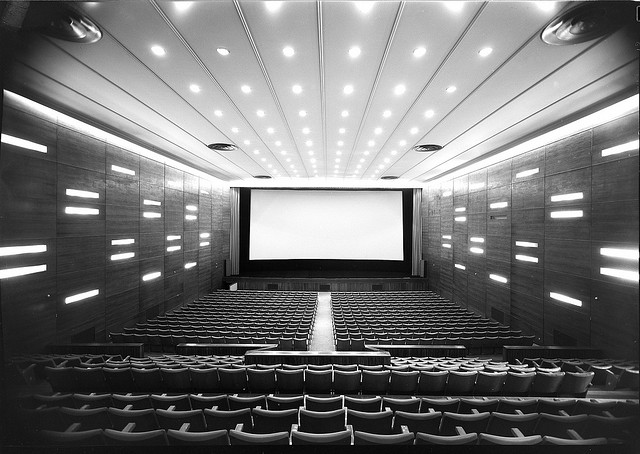 These days I don’t make it to the movie theater as much as I’d like to. And why would I? With Netflix, Amazon on Demand, Redbox and many other means of obtaining movies, there is little need to venture away from home. I also have extra incentive to stay home, an HD projector with a 120 inch screen in my living room — my way of bringing the cinema to me.

Normally I go to the Alamo Drafthouse Cinema, an Austin original, that has a different take on the movie going experience. Yesterday, I decided to go to a “normal” cinema.

I began second guessing my decision to visit the theater almost immediately. The matinee price tag was $7.50! That was the discount price. I’m not sure why, but whenever I go out to the movies, popcorn’s a must. Medium popcorn — seven bucks, almost as much as the price of admission. I considered getting a beverage to wash down the salty buttery goodness, but when a crappy fountain soda is going to run me $5.50, I’ll pass and I did.

I’ve been spoiled by the Alamo, because I forgot that somewhere in the late 90s theaters started showing wall to wall commercials before the movie. This always pisses me off. Now I realize that theaters need to make a buck, but come on really? I also understood why they needed to make a buck. There were a total of five people in the whole theater. Sadly, some of them were children, and not older children, but young ones, young ones that talk, yell and cry to the point that mom has to drag them out of the theater. Thank you, mom! I’m not sure what that mom did but when she brought the child back in five minutes later, not another peep. My theory — roofie. Hell, whatever gets the job done.

Before too long, I settled into the darkness, honed in on the movie screen, buried my hand in my bag of popcorn and let myself be taken away. Once the movie was over I remembered the beauty of going to the theater. I’m not sure exactly what it is, but it’s different from watching a film at home, even if it is on a 120 inch screen. Maybe it’s the fact that you’re in total darkness and totally removed. You don’t have to worry about your phone ringing or buzzing, or someone knocking on your front door, the urge to look something up online or take care of a household chore while the movie is playing. It’s a removal from distraction (crying kids aside).

I just wish they could get those prices down. I might just go everyday.