Education or Oil – Hmm, Which One Will Texas Pick?

Looks like Texas is going to take over $135 million reserved for public schools and other services and use it instead to pay for tax refunds to oil refineries. Texas public schools were already hit hard this year when their funding was slashed by close to $4 billion dollars. Now, the commissioners that Rick Perry […]

So, let’s see a few of the things that happened this weekend: 1. The United States gets ranked #26 for worldwide internet download speeds. I bet we’re #1 for internet cost. 2. The Occupy Wall Street Protest moved into week two. There’s been a lot of police violence and little news coverage. Figures. 3. Herman […]

Who Won? Let’s Hope None of Them!

In full disclosure (in case the title didn’t say it), I lean liberal and generally scoff at anything titled the, “Tea Party Republican Presidential Debate.” That said, the intro to the republican debate began like a football game and ended like a beauty pageant. Each of the players (uh, I mean candidates) were announced amid […] 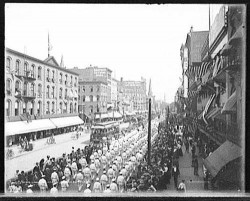 For all of you that have today off, enjoy it! Ironically, the very labor union groups that are responsible for this holiday are at their lowest percentage levels in more than 70 years. Only 11.9 percent of American workers are in unions. Only 6.9 percent of private sector employees are in unions. For more labor […]

Spruce Up Your Blog with Stock Photos