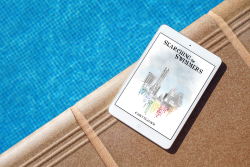 Jason didn’t know how it was possible to feel nostalgia for a place he’d spent so little time in, especially recently. But, nostalgia was what he felt as the landscape quickly float by in the back seat of the taxi to the Austin airport. He didn’t even have an opportunity to say goodbye to his cabbie. The guy wasn’t available. Jason was going to miss him. Jason felt philosophical. Maybe it isn’t nostalgia for Austin I’m feeling, but nostalgia for the whole experience of the last week. Somehow he felt free, not just from the shackles of potential offspring or from the job he hated but didn’t hate, but from his life, from his personal neuroses. Sure, he missed Denver, his friends, his bed, but those things, while representative of safety, were also representations of the life he lived in darkness, inside of himself.

He thought of all of the women he’d met: Sheila, Louise, Christina, Susan, Reese, and Gabrielle. Well, I really didn’t get to know Gabrielle, he thought. Jason saw the telltale signs of the airport: express parking lots, planes in the air, motels. He got out his phone and hit buttons, then leaned forward to his driver.

“Change of plans. Take me here,” he said, thrusting the phone in the sight line of his driver.

Jason paid the cab driver and got out. He stood in the place where the new chapter in his life had begun. Once again he stared at the dark blue door, but this time with sobriety and in the light of day. He grabbed his bag and walked up the cement walkway that split the yard into two symmetrical pieces. His bag hit the cement porch with a thud, and he rang the doorbell.

“Of course I did,” Gabrielle said. “Given the circumstances, wouldn’t you have done the same?”

Gabrielle began to close the door, but Jason wedged his foot in the opening just before it closed. “Wait, wait. This isn’t over.”

“I could explain the concept but then we’d be having an actual conversation, and that’s not going to happen. So, move your foot or I go get the bat again.”

“Yeah, and all I want is to have my baby in peace.”

“Oh, really? Good, now get your damn foot out of the way.”

“I will once you agree to talk to me.”

“Fine.” Gabrielle opened the door. Jason removed his foot, and before he could fall into a comfortable stance, she slammed the door shut.