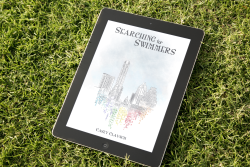 His head didn’t ache but it didn’t feel right. After he recalled his location, on the couch of Reese Taylor, he located his smart phone: 9:00 a.m. He rolled back into the couch even though he knew it wouldn’t do any good. With his head stuffed in the couch cushions, he recalled the conversation of the previous night, and the normal spiral of shame began.

Jason slowly got off the couch and did his best to combat his lack of equilibrium. Despite the slight spin of the room, he managed to make it into the kitchen, locate a glass, fill it with water and then drain it. He refilled the glass and thought about his next move, mainly if he should say goodbye to Reese or sneak out while he still could. Before he could decide, the decision was made for him.

Jason poured a glass of water for her. “Then drink up.”

Reese accepted the water. “Think you could rephrase that?”

“No, my brain isn’t capable of rewrites this morning.”

They sat down at the kitchen table and quietly hydrated themselves. Reese broke the silence. “So, what now?”

“Guess it’s back to Denver.”

“Why don’t you stay in Austin for a bit? When you’re not hunting down strangers who may be carrying your baby, it can be a fun town to visit.”

“That’s what I hear. Maybe you should take your own advice.”

Reese got quiet and looked away from Jason.

“No, you’re right. I don’t take advantage of the town.”

“Makes you feel any better, I only pegged you because it takes one to know one. Denver’s a pretty good place too, and I only manage to make it down to the local bar with some friends, and that’s on a good night.”

Reese turned back to Jason. “Actually, it does make me feel better.”

“Ah, losers unite, not that you’re a loser.”

Jason looked at Reese and felt for her. She seemed like a good person who was so internally bottled that she was unable to share her goodness with others. It was because of this evaluation that he felt so horrible shooting her down. “I really appreciate the offer and you seem like a sweet girl, but I don’t do romance.”

“Oh, you made that quite clear last night. I’m not talking romance. I’m talking friendship.”

Jason remembered Reese’s reference. “Shit, I didn’t say that did I?”

She smiled. “I think your exact words were, I’m not going to fuck you.”

Jason blushed, but felt relieved to see Reese blush as well. “Sometimes I get a bit, well, forceful when intoxicated.”

“I’d say it was the opposite of forceful.” Reese laughed. “It’s okay.”

“Your offer is certainly intriguing, and as much as I’d appreciate an opportunity to avoid my life a bit longer and make a new friend, I have to decline.”

Jason saw her disappointment and felt horrible. “I wouldn’t, however, mind some coffee and maybe some company for breakfast.”