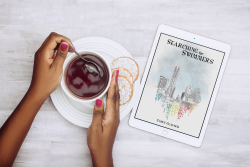 Jason stayed at CryoGenerous until it closed. He was then politely escorted out of the office and he called the cabby who had brought him to the facility.

“Wow, you must have had a lot of donating to do. Where to?”

“Alcohol. I need alcohol. Take me to bars.”

“Most of the time people do the drinking before they do the depositing. Guess they do things differently where you’re from.”

“No, I think it’s pretty much the same everywhere. People deposit whenever and wherever they can, regardless of drink.”

A mix of desperation and apathy soaked Jason’s mind as he stared blankly out of the car window. He was in a different city, in a different state, but everything looked just the same. Same people on the street. Same cars in the same driveways. Same buildings. Same businesses. Same parks. Same problems. How is it that everyone is so divided when everything everywhere is the same? he concluded.

The cabby had dropped Jason off in the nightlife hotspot of Austin—Sixth Street.

“You look like a cool guy, so I’ll help you out. There’s plenty of drinking to be done here, but most of it sucks—college kids getting wasted, shitty music and shittier drinks. Not as bad now since it’s a slow time, cause the college kids are just getting back from the holidays. Still a few solid places down here,” the cabby had said. He’d written down a list of the three or four best places to go.

For an off time, the street bustled with people, scents and drunkenness. It reminded him of a tame French Quarter. He wandered down the street with his suitcase handle in one hand, rolling it behind him, and the piece of paper the cabby had given him clinched in the other hand. After about five minutes, Jason stopped and took off his jacket. He couldn’t believe he was sweating in the middle of January. He looped the jacket through the handle on his suitcase and continued his stroll east.

Jason decided that Ross would love this place. After avoiding a few beggars and snidely smirking at a few drunk girls, Jason found his destination: LoveJoy’s. The bar was as dive as a dive could get. The place was dank and dark, small but not tiny. The customers ranged from the young to the old, from punk to prep, from the clean to the dirty. Jason looked at their beer menu and decided he liked the place. It was still early and the bar wasn’t packed, so Jason found a nice empty spot at the old wooden bar and ordered a shot of bourbon and a strong IPA to chase it.

Jason looked up from his full beer, four empty shot glasses, a pamphlet from CryoGenerous, and a piece of paper with handwriting on it.

“Oh my God. If your mother did actually die, I’m so sorry.”

“Then what’s the problem?”

Jason looked the woman up and down. She was striking: petite nose, delicate skin and piercing blue eyes, plus a nice rack. “Why are you talking to me?”

“Because girls like you,” he gestured up and down with his hand, “don’t talk to guys like me unless they need their taxes done or their bills paid.”

“That’s a bit short-sighted, but I’ll forgive you just this once.”

“Fair enough.” Jason took a slug off his beer and passed the piece of paper in front of him over to the woman. The paper had three full names written on it with a two-digit number next to each name.

A beer appeared before the woman without her asking. She took a swig. “So, what is this?”

Jason looked at her. “You really want to help me?”

“Don’t have anything better to do.” She looked Jason up and down. “And you certainly aren’t capable of much.”

Jason explained his situation, The Hardy Boys in the Case of the Missing Sperm.

“Look, it seems pretty clear to me that this is a list of potential suspects, if you will,” the woman said.

“Then what’s the problem?”

“Sorry, honey, you’re going to have to narrow it down a bit.”

“Calm down. You said only one vial is missing, so it would seem with what evidence we have you’ve got a one in three shot of being a daddy.”

“Yeah, with a complete stranger.”

“Not when the two people haven’t fucked and the sperm given isn’t consensual. I’ve lived the better part of my life away from relationships and casual affairs just so something like this would never happen.”

“Well, Jason, we don’t always get to deal the cards.”

“Yeah, but people never get ass-raped by the dealer either.”

“Hey, there’s more ass-raping in the world than you think. Be happy that yours is metaphorical.”

“Are you coming onto me? Because you’re really hot and all, but I’m not exactly in the right frame of mind here.”

The woman laughed. “No, I’m not and you’re not. Perhaps, some other time.”

“No, but I figured no need to kick a man while he’s down.”

“You know you’re something special, unlike any woman I’ve met before.”

Two hours and four pints later, Jason took out his smart phone. Jason fumbled for the search engine on his phone. His drunken jabs at the touch screen were yielding little results.

The attractive woman looked up from her pool game and saw Jason fumbling with his phone. She trotted over to the bar. “Need some help, hon?”

She took his phone away and started typing a few things into her phone. “Don’t worry, I already looked the first one up.”

“You what? How dare you,” Jason slurred.

“Well, that’s what you were doing, right?”

Jason grabbed the phone and looked at it. “Oh, good. Guess I should call a cab then.”

“Honey, you should call a cab, but not to go visit Ms. Trovato. Think you’ve had enough fun for one night.”

“Who are you? Huh? My mother?” Jason slurred.

“Not unless you have a serious Oedipus Complex.”

“Whatever, Mr. Lost Sperm.” She walked away while Jason stared at her ass.

Jason stumbled out of LoveJoy’s searching for his cab driver. The cabbie got out of his car and waved Jason over.

“I need to go, need to go, to this house.” Jason shoved his phone with the map in the cabbie’s face.

“Sure, no problem.” He opened the door for Jason then climbed behind the wheel. He picked up a colorful glass pipe and a small bic lighter. “Just having a smoke. Wanna hit?”

Jason grabbed the pipe and lighter, not even considering the question, took a hit and coughed out a plume of smoke.

“Nice, right? So this house, friend you’re crashin’ with?”

“Na, it’s a woman who might be having my baby.” Jason passed the pipe back and slouched into the seat.

“Damn. You sure work fast.”