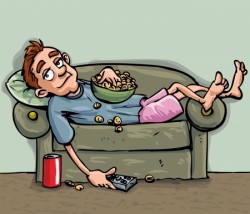 Last Thursday I woke up, well, a bit hungover – okay considerably hungover. After searching through my memory bank to confirm I hadn’t done anything particularly embarrassing, I fell into the familiar routine of moaning on the couch while binge watching whatever mindless, junk TV Netflix had to offer. Only there was one change in the routine – I didn’t feel guilty.

I didn’t realize it until last Thursday, but for the last two and half years, I’ve been unable to enjoy a lazy day (alcohol induced or otherwise) without a little voice within quietly, yet methodically, chastising me for not working on my book. As far as writing duties are concerned, I’m currently in limbo. My editor is proofreading my final draft and, well, there is absolutely nothing for me to fucking do! It’s great!

So, for now at least, when I waste my free time rewatching The West Wing in its entirety, or playing Bejewled for three hours straight, it’s not actually a waste. There are moments during these “wasteful” activities where I pause and ask myself, “Isn’t there a better way to utilize your time?” Gratefully, the answer is a resounding, “NO!”

I mean, sure there are plenty of other non-writing valuable ways to spend my time. I could exercise. I could stroll through the park on a beautiful day. I could donate my time to a valuable cause. Or… I could have a guilt-free Breaking Bad marathon while eating an entire half-gallon of Bluebell’s best, washed down with a six-pack of Ranger IPA.

Ahh, the good times…for a while. Come April, I begin my next novel, and while I’m sure my life will still hold plenty of laziness, it won’t be guilt-free until the book’s near completion. But until that time arises, I’m going to resume my eighth hour of television viewing while consuming at least half the loaf of banana nut bread that is currently on the cooling rack in my kitchen.