A Glutton for Thanksgiving 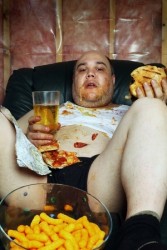 I know Thanksgiving is long over so its seems silly to write a post about it now, but to use the cliche — better late than never. I would have liked to write this post on Thanksgiving itself or the day after but unfortunately it goes against one of my Thanksgiving traditions — absolutely no work.

Several years back I decided that Thanksgiving was a celebration of gluttony and sloth, curiously two of my favorite sins, and the day should be spent enjoying these two sins above all else. Of course, if friends or family happen to be around to share in the feast of gluttony and sloth all the better but neither are required.

Traditionally I forgo, well, the traditional turkey and barbecue instead. And by barbecue I mean real barbecue, not burgers or steaks on a gas grill, but brisket and pork butt slow cooked in copious amounts of mesquite smoke. Sadly my smoker is defunct and I did not remedy the situation in time for the great holiday so I guess this year I focused much more on sloth. In fact, I was so slothful that I didn’t make barbecue or invite any friends over.

So I definitely had the sloth part down and was accompanied by a pork tenderloin, a pumpkin pie, and my grandfather’s macaroni and cheese (famous in my family as Frank’s mac n’ cheese) to assist with the gluttony. Now I wouldn’t be a glutton if I didn’t throw booze into the mix so, per tradition, there was a large bottle of bourbon, JTS Brown. Not the best bourbon but perfect for a budget and long haul drinking.

I made pretty good on the glutton portion of the holiday, eating half of all the food I prepared and finishing close to half of my 1.75 liter bottle. Also for the first time in years I got to enjoy all three football games in their entirety. I rarely left my couch. It was wonderful!

Sadly, I made one miscalculation — I out ate my drinking, so I was stone cold sober by the time the Longhorns made the Aggies cry (although they’ve been whining all year).

This year the sin celebration trickled into and then exploded throughout the weekend and by the time Sunday ended I was just about sick of my two favorite sins, which is why my Thanksgiving story was written three days after the holiday came to an end.