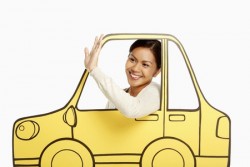 It's bumper to bumper traffic on a hot summer day. I feel the heat emanating from the drivers around me more than the heat steaming from the concrete roadway. Someone in the lane to the left of me has his right blinker on. Once the next minor lunge forward in my lane occurs, I keep my foot heavy on the brake and wave my hand repeatedly to the right. I see recognition in the driver's eyes through his review mirror. He smoothly moves over and I am one car length further from my destination. As I prepare my wave back to the motorist, I realize I don't need to bother, because he never gave me a courtesy thank you wave in the first place.

I realize that most of you are probably thinking, okay, what's the big deal? To those people allow me to explain simple southern hospitality. Here in the south we hold open doors, not just for women and the elderly, but for everyone. Here in the south we shower people with politeness. Plenty of thank you(s) and please(s) with sides of yes sir and yes ma'am. It's just who we are, and despite having grown up in the largest city in Texas (Houston), I was still imbued with basic manners and courtesy that, once I started driving, extended to the roadways. I was taught that you signal when you turn or want to get over, that if someone needs to get over, you accommodate their need, and if someone does you a similar courtesy that you give them a polite wave to acknowledge said courtesy. It is just how things are done. So when I realized the lack of roadway courtesy that has recently befallen my adopted home of Austin, after a long eighteen years of residency, I was naturally concerned.

Please allow me to digress a bit in order to eventually explain my concern. When I first moved to Austin in 1997 the population was just shy of 600,000 people. Fast forward to present day and not only are we the second fastest growing city in the United States, but we're months away from hitting the 2 million mark. Everyday 157 people move to Austin, which aside from our limited city planning and reliance on automobiles to get around, is a great thing. I love my town (city now, I suppose) but I don't want the basics to get lost in the mix.

Okay, now I'm going to digress even further. First a disclaimer:  I am a horrible joke teller, and remember few jokes, but there is one bad joke that has stayed with me for years. Here goes. How many Austinites does it take to screw in a light bulb? Don't know? The answer is one. One to screw in the light bulb and one million, nine-hundred thousand, seventy-six to sit around discussing how the old light bulb was so much better. That joke is pretty much the Austin psyche in a nutshell. It seems that each generation has their ideal Austin, and as it turns out (surprise, surprise) the Austin of their youth is the ideal Austin, which has made Austin an odd city indeed. We want you to visit. We want you to enjoy yourself. We want you to realize how special our town (sorry, city) is, but for the love of god, none of us want you to stay!

When I first moved to Austin in the late nineties to attend UT, I befriended a lot of locals, contemporaries that grew up here, and after I graduated and stuck around I always kidded about how I was part of the problem. My friends, being hospitable, would grin and tell me, "No, Casey, you belong here," but they didn't really mean until I'd been here over a decade.

Perhaps I've just become the old curmudgeon that I've always dreamed of becoming. On that note, as a quick aside, I'd just like to inform all of you kids out there to get off my damn lawn! But I'd like to think that it's more than that. I'd like to think that as my neighborhood gets swallowed by condos, more condos and ever increasing property taxes, while all of the music venues of my youth in the Live Music Capital of the World get shut down to the very same rent and property tax increases and noise complaints from new residents in new downtown high-rise condos, that maybe, just maybe there is some hope for my home, my little town that took me in when I was a high-minded, idealistic youth, churning to change the world. That maybe, just maybe, when I allow a car to squeeze by to ease the driver's day, maybe, just maybe that driver will acknowledge that small courtesy, something that will tell both her and I that change isn't so bad, that the world, well, doesn't suck as much as the media, and the mendacity of life leads us to believe. That maybe, just maybe that stranger will give me the chance to wave back.