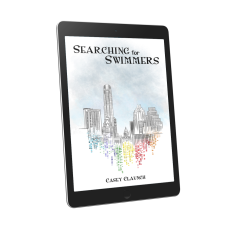 Jason found himself back at LoveJoy’s. While working on his third pint, he decided to postpone his trip home. He wasn’t sure how long he was going to stay in Austin. All he knew was that he wasn’t ready to leave. As the cool, hoppy flavor of one of the local IPA’s slid down his throat, he felt remorse. He had told Reese he was leaving, but he hadn’t. He considered calling her and inviting her out for a mid-afternoon beer, but decided against it. Currently, he was bad company. Jason’s thoughts were interrupted by the bartender’s approach.

Jason looked down at his half-empty pint. “I’m good,” he said.

“You don’t look it, but most people in here at this hour don’t. No, I had a question.”

“Why do you always have a suitcase with you?”

“That is a long answer, one I don’t quite feel like divulging at the moment. Give me a few beers and my mind might change.”

“Fair enough,” the bartender said as he poured a shot of top shelf bourbon and slid it in front of Jason.

Jason stopped the shot’s slide with his pint glass. “Thanks, but I think I’ll stick to the beer.”

“It’s not from me,” the bartender said. “It’s from her.” He pointed over to the pool table where the mystery woman he’d met before was lining up a shot of a different kind.

“Then I guess I have no choice,” Jason said.

“Oh, you have a choice,” the bartender said, “and the choice is quite clear.”

Jason sipped the shot—Booker’s. Although he felt guilty for abusing such a fine bourbon, he took the rest of the drink in the second swallow and winced. He looked over to the pool table and watched the mystery woman’s shot go in too. She stood up, smiled and put up her cue on the wall. She sauntered over to the bar. “So, why are you still here then?”

Jason leaned back in his chair and stared at his beer. The fifth of the day, he guessed. “Did you follow me?”

“No really, I hate flying. Only did it once when I was eight. Never again.”

“But you were on the plane.”

She patted his hand. “If you say so, dear. So, your monk-like status still intact?”

“Hey, I’ve turned down finer asses than yours when I was far drunker.”

Jason sipped on his beer and in a split moment, reevaluated his whole life philosophy. The sad conclusion he came to was that bedding this beautiful and mysterious woman wouldn’t alleviate any of his questions about life or her, in fact, it would probably only complicate all matters further. “Yes.”

She smiled. “Good, because I would’ve said no anyhow.”

“Do you enjoy fucking with me?” Jason asked.

“Maybe a little, but I’ll tell you a secret. You enjoy it far more than I do. I’ll get us some more beers.”

Jason watched her walk away and hated her, himself and the world, all because, at least in this moment, he knew she was right.

Gabrielle pressed play on the DVD player. She curled into her blanket on the loveseat in one of her spare bedrooms with a pint of Chunky Monkey. Her mind was elsewhere during all of the previews that she normally enjoyed watching more than the movie itself. Normally she would’ve curled up with a glass of wine, her one glass, but that had all been ruined by Jason Purdue’s visit. Her thoughts also drifted to him because of the question he’d asked about her television. When she’d told him that TV rots your brain, it had been truthful, but she hadn’t exactly been truthful about not owning a television. She just preferred it not be the focus of the living room. Soon, she guessed, it would be the family room.

She remembered the day she had moved the TV from the living room, because she wanted the room to be more friendly to conversation and guests. But why? I don’t really have that many friends, and those I do have aren’t that close to me, accept for one, maybe two. She knew that as they’d all gotten older, those friends of hers had developed their own lives; and it wasn’t that their lives no longer intersected, they did, just less and less often as each year passed. Gabrielle knew she needed to be honest with herself. I’ve spent more evenings in this cramped little room than in my living room. As she spooned ice cream in her mouth, she decided she preferred not to dwell on the metaphorical implications of that thought. Instead, she leaned back and watched the opening credits of this evening’s entertainment.

“So, why are you still here?” she asked.

“Didn’t we already have this conversation?” Jason asked.

“Not sure it qualified as a conversation.”

“You really trying that hard to get rid of me?”

“Would I follow you to San Francisco if I were?”

“No, just fucking with you.” She laughed.

Jason took a swallow of beer. “Not to sound pretentious, but it just doesn’t feel like my journey’s complete.”

“What are you going to do about it?”

“Anyone ever tell you that you’re too old to be so clueless?”

“Aside from you? Me, everyday in my mirror, amongst the occasional friend.”

“You mean, you actually have friends?” She smirked.

“Not everyone. Maybe you should consult them?”