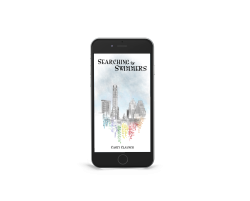 Jason sat at a booth in a restaurant. He sipped his third cup of coffee and played with the individual creamer cups, stacking them until they fell over. He had never used the creamers waitresses had brought him with his coffee until now. Normally, he would have felt guilty taking up a booth without ordering anything, but the restaurant was far from capacity, and he was in an uncommon state of simply not giving a shit.

Louise had offered to let Jason hang out at her and Sheila’s place until dinner, but Jason had declined. After wandering around the Mission for a couple of hours, Jason had settled on arriving early to the restaurant that Sheila had suggested for dinner. Jason wasn’t sure why he was there in San Francisco, but he knew that he wasn’t ready to go back to Denver. What was next hadn’t found him. The only thing he did know was that Denver wasn’t next. But since he wasn’t sure why, he sipped his coffee and stacked the creamer cups. The tower of creamer swayed precariously at eight cups. Jason delicately placed a ninth on top, causing more instability, yet the tower still stood. He knew the stack couldn’t take a tenth. Still, he attempted the tenth cup and watched the building blocks tumble and scatter across the table. Perhaps it is time to build a more stable foundation, Jason thought.

“So you’re in the clear,” Louise said.

“Jason, you are not having a baby. Congratulations.” Louise and Sheila laughed.

Sheila’s forehead wrinkled and her head tilted slightly to one side. “Then why so glum?”

“Yeah, that’s it,” Sheila confirmed. “Considering the good news, I figured you’d be on a plane back to Denver. That is, unless you’re considering a move to be closer to your two new near and dear friends.”

Jason focused on the tortilla chip and queso before him. He dipped the chip and then watched the cheese drizzle back down into the bowl.

Jason put the chip in his mouth and looked up. “Yeah, sorry. What’s up?”

“I’m not sure, but something just doesn’t feel right, and I don’t know exactly why.”

“Well, it’s been a long journey and now it’s over. Maybe you’re just feeling a bit displaced is all,” Louise suggested.

“Yeah, that’s part of it, but not all of it.” Jason returned to his chip and queso meditation. “It just all seems too neat.” The cheese trickled down the chip into the bowl.

Sheila straightened up. “Okay, we can figure this feeling out. So tell me, how is this all too neat?”

Jason wiped the chip on the edge of the queso bowl then set it on his plate. “I was given a fucking list for Christ’s sake. It doesn’t get much neater than that.”

“No, it’s not just the list,” Jason said, frustrated. “I mean, why did Reese give me the list?”

“Maybe she just felt sorry for you. Wanted to help you out,” Louise said.

“Yeah, I’m pretty sure that’s it, but why not just come out and tell me? Why be all cloak and dagger style? And that’s what it feels like.”

“Are there thugs following you?” Louise joked. “Shaking you down. Stealing the list.”

“No, it’s more like Colonel Mustard in the kitchen with the fucking sperm vial. Just too on the nose.”

“I don’t know, Jason,” Louise said, “seems like you’re just disappointed that your first real-life detective story turned out to be too simple and straightforward.”

“I’m not sure about that,” Sheila said, “I think Jason’s on to something.”

“Yeah. And when it all seems too neat, what do the great detectives do, kid?”

“No, well, yes, maybe, but what do they do after they sober up?”

“You know, I wasn’t really much of mystery reader.”

“Jeez. They retrace their steps, go back to the source.”

Jason looked up from the queso bowl. “So you think I should skip Denver and go back to Austin?”

“And do what exactly?”

“Damn, Jason, do we have to spell everything out for you?” Louise asked.

“See, that’s why I suggested he stay. We could help him spell, do arithmetic, all of it.” Sheila smiled. “Go talk to this Reese woman again. Get those answers you don’t seem to have the questions for.”

“Okay.” Jason dipped his chip again and ate it.

“Can we order now?” Louise asked.

“Yeah, before I lose my appetite. Watching his pathetic chip and dip display almost killed food for me, which given my situation, speaks volumes.” Sheila flagged the waiter. “Never seen someone make food look so depressing.”