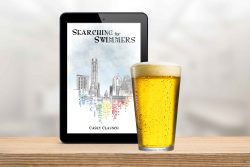 Jason sat behind his desk at work. The workday had been just like all of the others, slow at first, hectic from around ten until noon, short lunch break, hectic until about three, and now it had finally slowed back down. The last couple of hours would be a welcomed bore, keeping up with emails, chatting with Brenda, avoiding Danny, and surfing the Internet.

Jason took this opportunity to check his personal email. He clicked on an email. The subject line read, “Your Specimen Was Received.” Wow, Jason thought. It was all so strange. Getting an email about your spunk.

“Oh, isn’t that nice?” Jason said out loud to himself.

Jason jumped and quickly closed his email. “Nothing. Nothing at all, Brenda.”

“Now, you wouldn’t be checking your personal email during work hours?”

“Come on now,” Jason said with a smile.

“Oh, I’m just razzin’ you!” Brenda swatted the air and shook with laughter. “Who was that email from? Someone special?” A sly smile curled her lips.

“Nope. Promise.” Jason clicked back to his work email hoping there would be something important to attend to. Nothing.

“What’s okay?” Jason looked up from his computer confused.

“I’m just saying when we were younger, it was bit more taboo. But dear, you don’t have to hide it from me, heck, anyone else for that matter. Maybe if we lived in Alabama, but we live in Denver.”

“Brenda, I don’t know what you think you saw, but—”

“If you don’t want to tell me it’s fine, but I just want you to know that there’s nothing to hide, and I’m fine with your, um, decision.”

“Decision? Who told you? Was it Ross?”

“No one told me anything.” Brenda smiled. “Is Ross your boyfriend?”

“What?” Jason voice rose an octave. “Ross is just a friend.”

Jason stood up. “This is a big misunderstanding. I’m one-hundred percent heterosexual.”

“Okay, if you say so.” Brenda smiled.

“Now, there’s no reason to get rude.” She sat back at her desk.

“I’m not being rude. I love it! Love to rub my face and balls around in muff.”

“Now, you go talking like that and I know your just running from the truth.” Brenda resumed her duties at her desk, her smile faded to a line.